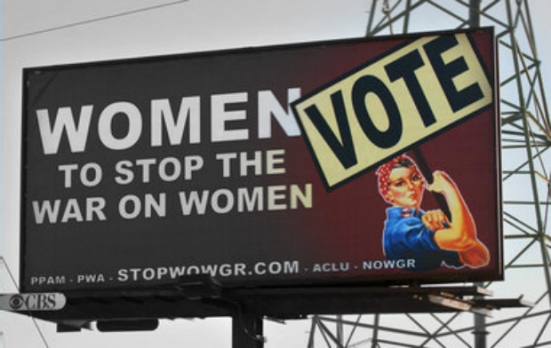 With the 2012 election looming, it’s critical that women are being heard and music is a great place to start.

The “War on Women” is a blanket term for the innumerable ugly ways the politicians and talking heads prove again and again that they find the fairer sex to also be the more feeble sex. Women have to listen to how weak-willed we are to succumb to the rape we, actually, invite.   You’re weaker still when your body recognizes you weren’t “legitimately” raped, refusing to “shut down” the pregnancy on its own, and flippantly make the decision not to carry the child resulting from a violent crime to term.  If women were doing their jobs as devoted wives in a traditional nuclear family, gun control discussions wouldn’t be on the table.  In a “legitimate” (yeah, I’m using it the way they do) debate, a moderator had the audacity to ask the female candidates  if, in the wee hours of the night when no one’s looking, they clutch their pearls and pour over the smutty literature craze sweeping the nation.  But you’ll get the ax on the House floor if you have the audacity to use the word “vagina” when discussing vaginas.

And all the vitriol a girl can muster, while still remaining a lady, is easily be dismissed as a wicked case of PMS.

Here are four tracks to remind ladies that the side you choose to support should never override your rights as a woman. Or, as Nora  Ephron said, “Whatever you choose, however many roads you travel, I hope that you choose not to be a lady. I hope you will find some way to break the rules and make a little trouble out there. And I also hope that you will choose to make some of that trouble on behalf of women.” (This will be the second time I have to assure you, there’s no Sarah McLachlin on this list.)

1. Prince– P Control: I know Prince is a guy, an infamously raunchy one represented by a symbol at the time, in fact. But consider how Prince worships women. On the same 1995 album as his soulful celebration of womankind, “The Most Beautiful Girl in the World”, is “Pussy Control”: about giving the utmost respect to a woman who demands respect because she has earned it. Throughout the song the titular character stands up to bullies, works hard to become educated, and refuses to ride the coattails of men. And when Prince’s character approaches her about getting down, he says he knows he has to recognize who she is and what she’s about. It’s essential that the media recognizes woman as a key demographic who is well-informed the issues, not a bunch of hormonal basketcases who’ll only look up from their copy of 50 Shades of Gray to put a check mark next to the sexiest presidential candidate.

2. Le Tigre- Deceptacon: As the front woman of bands from  Bikini Kill to Le Tigre,   Kathleen Hanna was the original riot grrl and has remained an important face of modern feminism for over two decades. The energetic electroclash ditty “Deceptacon” is rumored to be about Hanna battling a dumb dude who dared to question her ability to put down lyrics, rhymes, and riffs. The Lilly Ledbetter Fair Pay Act of 2009 was the first bill signed into law by President Barack Obama, but it’s important that women keepworking against discrimination in the workplace. Crank up whatever Hanna-project rock that inspires you and know that her roots in feminism were found in solidarity too.  She once explained, “…my mom was inspired to work at a basement of a church doing anti-domestic violence work. Then she took me to the Solidarity Day thing, and it was the first time I had ever been in a big crowd of women yelling, and it really made me want to do it forever.”

3. Salt N Pepa- None of Your Business: Long after they pushed the envelope with their  hip-hop classic “Let’s Talk About Sex”, S & P laid down some sexy New Jack Swing with a lady’s Spin (-derella), demanding the double standard be done away with. They take to the mic with their signature, erm, frankness about freakiness to simply say, “my body and my sex life are my own”.  It’s tough to leave religion out of the debate about women’s rights, but there is a basic thread running through it all that surely we can agree upon: woman are competent and capable of deciding what health care decisions best suit their beliefs as well as short and long term goals. And it’s a shame that needs said out loud.

4. Aimee Mann- Wise Up: Her lush piano and pleading lyrics mark a sort of awakening of the characters in Paul Thomas Anderson’s film Magnolia, let’s use it as ours too.  No matter what your affiliation, singer-songwriter Aimee Mann‘s somber words are ideal to remember as you cast your ballot:  ”Prepare a list of what you need/ Before you sign away the deed/’Cause it’s not going to stop/ It’s not going to stop/ ‘Til you wise up”.