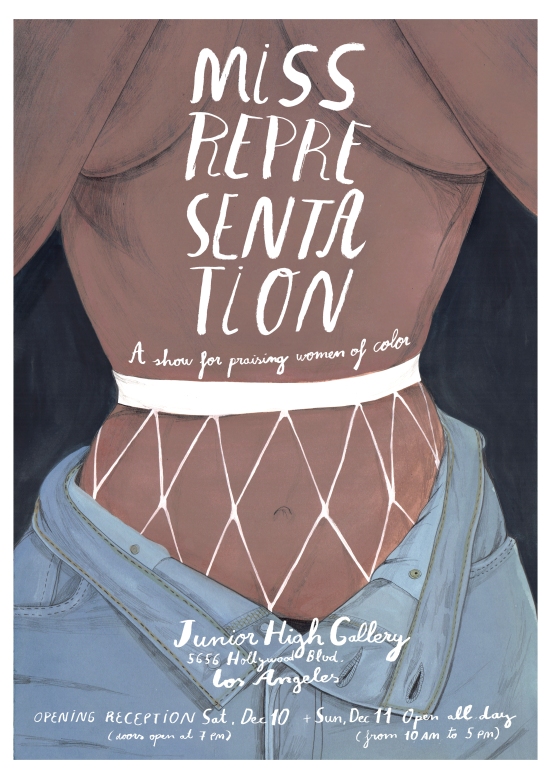 [Originally shared at LadyClever.com] IN 1985, The Guerilla Girls famously protested that only 5% of the art on the walls of The Metropolitan Museum of Art was made by women, yet they made up 85% of the depictions of nude bodies. While many women have broken through since then, the art world is still very much a (very white) boys’ club. This weekend’s MissRepresentation art show celebrates the works of women and aims to give them — specifically women of color — a claim to that deserved, and too-often hard to acquire, gallery space.

Co-curated by artists Erika Paget and Maritza Lugo, “MissRepresentation focuses on subverting classically and societally white-centric imagery by redesigning it through a WOC lens. We aim to magnify the arbitrary nature of cultural standards and the necessity of diversity and representation within culture and the art world.”

The show is for all women of color who might not feel like they have a place. In MissRepresentation, they do. The space is for them. — Co-curator and artist Maritza Lugo

MissRepresentation takes place this weekend on December 10th and 11th, at Junior High art gallery in Hollywood; the space is run and owned by girl boss and Instagram-famous artist Faye Orlove, and was the site of this past summer’s headline-stealing sex-positive showcase dedicated to oral sex,  Eat Me.

The show will feature nearly forty women, including Lugo and Paget themselves, as well as  Nimisha Bhanot, Maria Herreros, Meera Lee Patel, and Cliffannie Forrester — who holds the distinction of being one of the youngest artists to have their art shown at the aforementioned MET in NYC — just to name a few.

“A lot of the challenges that the show faced was that a lot of galleries were very bluntly not interested in a show that only displayed Women of Color art,” co-curator Maritza Lugo explained to HelloGiggles.com. “There’s a mixture of established artists and first timers in our show and honestly, the combo is amazing. It’s part of the show’s whole point: the show is for all women of color who might not feel like they have a place. In MissRepresentation, they do. The space is for them.”

“More than anything, I hope WoC artists see themselves as a force to be reckoned with, especially in the art world,” Lugo told Hello Giggles. “It’s so male dominated and white that if we have to break down the doors ourselves, then that’s just how it has to be. It’s like that quote from Kimmy Schmidt: females are strong as hell.”

“I couldn’t be happier with it… it’s everything to me,” Maritza wrote to LadyClever in an email.

Admission is free with a $5 suggested donation, all ages. RSVP here. — Casandra Armour

Update: MissRepresentation has been extended until Jan. 6. If you were unable to attend during the show’s opening weekend, you still have lots of time to check it out!