The Republicans once again enjoyed the spotlight this week not for their sparkling rhetoric (maybe someday, Steve Doocy) but because of a hideous anti-Obamacare propaganda viral video, which depicts a young woman visiting a reproductive health clinic and getting sexually assaulted by Uncle Sam. [Scroll down to watch the full clip] 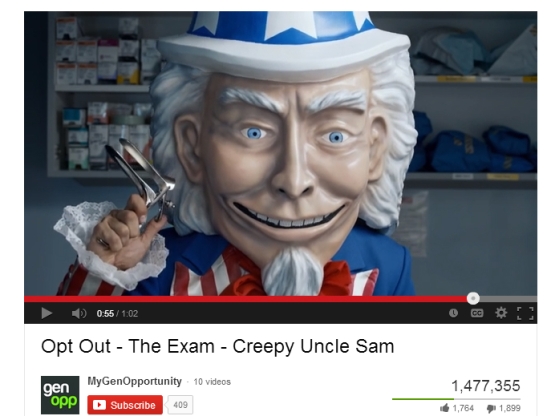 The Maddow Blog  wrote, “….this week, a far-right outfit called “Generation Opportunity,” working under the assumption that young Americans are idiots, launched the above video. If the goal was to get people talking, it’s worked quite well — most decent people are amazed Republicans could be this creepy on purpose.”

Posted by the “edgy” political group Generation Opportunity, the project is titled “Opt Out- The Exam- Creepy Uncle Sam”. Creepy? I don’t think creepy begins to cover it when an eerie-grinned freak wields a speculum at a naked woman with her feet in stirrups. Imagine how conservatives would shudder and shriek at the “gayness” of it if liberals launched an ad with a leering, jubilant Uncle Sam giving a prostate exam to a nude man for shits and giggles. But these vagina-obsessed GOP perverts find it a-ok to put a woman in a perilous situation to prove a point. (Oh wait, watch the surprising follow-up, The Glove, where this time Uncle Same does actually dish out anal penetration to an unsuspecting young man. Hilarious!)

Generation Opportunity is  a Virginia-based group that is part of a coalition of right-leaning organizations,  according to Yahoo’s Chris Moody, “with financial ties to billionaire businessmen and political activists Charles and David Koch, will launch a six-figure campaign aimed at convincing young people to “opt-out” of the Obamacare exchanges.”

The party has no right to parody such a serious situation for the sake of their pitiful Opt Out campaign. Comedians like Louis CK can make rape jokes (jokes being the operative word) when they, you know, don’t make provisions and excuses for rape, abuse and disregard woman, or treat the female population like empty-headed baby factories that are little more than personal property to a man. But this? Coming from them?

It’s a very vulnerable position a woman is in when a she’s nude save for a hospital gown and laying on that table being examined in the most intimate of places,  a task crucial to every woman’s reproductive and overall health. The instruments and procedures are not comfortable physically, and sometimes psychologically depending on your personal history. The implications (though “implication” suggests some subtly, while there is little left to the imagination here) are more than “Obamacare is bad”, it’s a clear-cut menacing “Obamacare is raping you” message– and I don’t climb on the alarmist rape-culture bandwagon too easily.

And if you think rape is funny, boy howdy, Generation Opportunity would like to spend some more time with you! The group will be touring college campuses this fall, palling around, throwing back a few brews, and tail-gating with their fellow Republican bros before the big game on Saturday. “Brand ambassadors” (read: hot young people) will pass out beer koozies that read, “opt out,” pizza, and literature about the health care law,” Moody shared. “Some events may have impromptu dance parties with DJ’s, complete with games of Cornhole and competitions for prizes, organizers said.”

I’d love to think that young college students won’t take those beer cozies, won’t play cornhole in the name of  discrediting Obamacare, but then I see that only a slight margin more people who viewed this video clicked dislike, rather than giving it a big fat, fucking thumbs up. Only one hundred more people found this sick and poorly-executed piece of crap’s message  to be offensive than thought it was great. Is it more chilling that this video was funded and made, or that it’s being shared and supported by people that think they have the right idea? — Casandra Armour