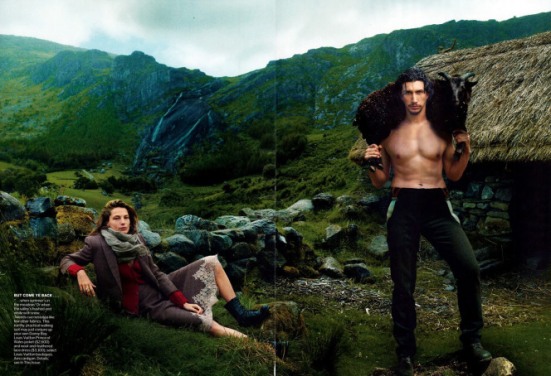 Selling shirts might not exactly be his strong suit, but Adam Driver definitely has a look that will turn the pages of a magazine. From merely the resident shirtless twitchy perv hookup, Adam became the barefoot hero sprinting shirtless through Brooklyn to Lena Dunham’s rescue on HBO’s ‘Girls’,  and now he’s adorning the pages of Vogue, duh, shirtless.

In season 2, episode 9 of the show, Adam’s new squeeze Natalia takes him to a friend’s engagement party where a concerned galpal pulls her aside and spotlight his creepiness, saying he “has the face of an old timey criminal”.  Dumbfounded, Natalia, with a bit of subtle insight to his true nature, replies: “What are you talking about? He looks like Peter Pan.” While Driver definitely isn’t conventionally handsome, there is certainly something striking yet classic about his face.

The former U.S. Marine turned actor, now turned model, has an appeal that Gap seems like a bit of an uncomfortable fit for, perhaps only because it’s tough to shake him dressed as a preppy hipster knowing his character so, er, intimately. But when he stepped in front of legendary photographer Annie Leibovitz’ lens for the always-anticipated September issue of Vogue in a rugged farm country locale, donning discarded suspenders and high waisted trousers, and of course shirtless, he looks right at home.

Fashionista.com reported ”New Yorker  writer and Vogue  film and TV critic Nathan Heller tweeted a picture of the Vogue editorial shot by Annie Leibovitz, which appears to feature Daria Werbowy and Driver against a countryside backdrop (my guess: it’s somewhere in Ireland, where Werbowy recently bought a house). (Update: it is!) Driver is balancing a sheep on his shoulder and, guess what? He’s not wearing a shirt!”

“Driver is also starring in Gap’s fall global marketing campaign Back to Blue,” Fashionista continued, “lensed by Inez and Vinood, which will span print, digital and TV.”

A few snaps of Adam, even with clothes on, are a tough reminder that ‘Girls’ won’t be back until spring of 2014. Will you pick up the September issue of Vogue to sneak a peek of his mountain man physique to tide you over until then?   – Casandra Armour  [Originally hosted at LadyClever.com]